Swine Flu Paranoia Gets Out Of Hand 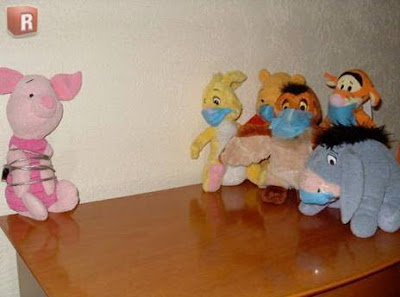 With all the bad news lately, we all need something a little silly.
Source: Stacy's Random Thoughts, written by my sis, Stacy.
at 5:07 PM 1 comment:

New post on government regulations requiring employers to collect and report employee and dependent personal information to a federal agency: "My News Muse" here.
at 3:37 PM No comments:

Well, it happened. Read my blog post at MyNewsMuse about the Seattle Post-Intelligencer's final print newspaper published on 3/17/09 here. Good-bye, old friend.
at 9:43 AM No comments:

Be part of history...

Any freelance photogs out there? Check this out: "Get your Obama pix published in inaugural book."
at 3:43 PM No comments: 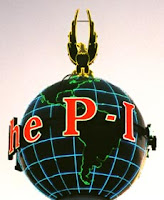 Last semester, I wrote my final paper on the "Future of Journalism" about the problems and challenges facing American newspapers.

Then just tonight I learned that the Seattle Post-Intelligencer, the paper where I worked in the late 80s before my first son was born, is up for sale. Read more here. Given the economy, this is most likely the death knell. Reading the announcement was like reading an obituary for an old friend.

The P-I started in 1863, before my home state of Washington became a state. That's old. The P-I is also famous for the iconic globe that slowly turns above the building off Elliot Bay in Seattle. (This just in: "Wristbandfactory.com Bids on Seattle P-I Newspaper Globe".)

Now, let me say that I did not agree with reporters and cartoonists who pushed their agendas (I never do), but I cared for these people as my co-workers and, well, because they're people. And like the rest of us, they have children, spouses, mortgages, dreams and desires--so my heart goes out to them. Journalism is a tough job, but life is tougher when you don't have any job.

So my liberal friends at the P-I, you may have objected to prayer in schools, hated Bush, and laughed at conservatives, but in the face of this announcement over the P-I's tenuous future, I am praying for you and your families during this very difficult time.

P.S. - You can follow the P-I on Twitter: http://twitter.com/seattlepi. (Sadly, they haven't mentioned a peep about Hearst's decision to put them up for sale. Sorry, pun intended.)

Berkley Books, a unit of Penguin Group, canceled the release of Herman Rosenblat’s memoir, "Angel at the Fence", after Rosenblat admitted he did NOT meet his wife at the Buchenwald camp during the Holocaust as he had claimed. She never came to give him apples and bread through the fence like he's been telling since the 1990s after he submitted an entry to a newspaper competition soliciting the "best love stories."

Now that he's been caught, he says he only wanted to "bring happiness to people, to remind them not to hate, but to love and tolerate all people." In that statement he also wrote, "I brought good feelings to a lot of people and I brought hope to many. My motivation was to make good in this world. In my dreams, Roma will always throw me an apple, but I now know it is only a dream."

No, Mr. Rosenblat, it was not a dream. It was a lie. And let's get this straight since you're so prone to justification and rationalization: You did NOT do this to "make good in this world."

No, sir, you embellished your story so you could win a newspaper competition.

You probably didn't imagine the story would go any further than the one newspaper--but someone read your story and the media began calling. You and your wife--how did she agree to go along with the lie?--appeared on Oprah, twice. Twice! Your story was included in Chicken Soup for the Soul, which looks for true stories--but yours is NOT true. This is an offense to all of us who have experienced truly miraculous events and shared them in print; your deceit undermines those real miracles. You also jeopardize other Holocaust survivors' stories. How dare you.

Yours was not a miracle because it never happened. You made it up to win a contest. Then when the story spread, you couldn't admit that it was embellished (to make it better so it could win). You decided to perpetuate the "other" story, the one that wasn't true, because it brought you attention, admiration, and later, a sense of nobility for bringing people "hope."

Mr. Rosenblat, you are a liar. And a selfish coward.

The publisher wants their advance back. Perhaps Oprah's people should demand reimbursement for your two guest appearances on her show. You should also return the award for the newspaper contest. I wonder who would have won instead? You stole that honor from a true love story by lying about yours.

And you make it much more difficult for people to believe the true miracles. Miraculous circumstances really happen (I've experienced them), but when someone like you lies, you not only reveal your weak character and immoral ethics ("the end justifies the means"--offering hope through a lie), you do terrible, irreversible damage to the believability of real miracles.

Join the ranks of liars: Margaret Seltzer, author/liar of "Love and Consequences," who fabricated her gang memoir as a white girl taken into an African-American foster home in South Central Los Angeles when she had in fact been raised by her biological family in a well-to-do section of the San Fernando Valley--and James Frey, author/liar of "A Million Little Pieces," who exaggerated most of his memoir about his drug and prison experiences in order to get published.

You betray the public. And you're selfish. The "good" you think you do is false, self-serving, and short-sighted. I want authenticity, not fakery.

And the point is so important I will make it once again: your lies make it harder for us to tell and to believe true stories of miracles. Instead of hope, as you claim, you awakened cynicism and doubt, and made it much more difficult for those of us who have truly experienced real miracles to be believed.
at 5:43 AM 1 comment:

...Last week, the U.S. Supreme Court refused to review photographer Jerry Greenberg's appeal (okay, the legalese is "denied the appeal") in his 11-year-long case against National Geographic for including 60 photos of his work in "The Complete National Geographic," a 30-disc CD-ROM compilation.

The Supreme Court denied Greenberg's petition for a writ of certiorari on Monday, which lets stand the 11th U.S. Circuit Court of Appeals decision from July holding that the National Geographic Society – and by extension, other publishers – have the right to reproduce their magazines' archive in digital format without paying any additional royalties to freelance photographers.

"In these terrible economic times it will now allow publishers to create and sell electronic archives of their previously published works without infringing on the copyrights of the contributors to those works. This creates a terrible burden on the ability of photographers to earn a living.”

“It will now be imperative for photographers, authors, artists, and creators to be aware of this
decision as they negotiate for the use of their work and make sure that any contract that they agree to clearly delineate those rights and limitations."

This appears to weaken the 2001 ruling in New York Times Co., Inc. v. Tasini, a case decided in favor of the authors over electronic rights.

Read the full story on this latest blow to freelancers here, and more about the history here and here>.

Kimn
Iowa (formerly of Seattle)
Kimn is a freelance journalist whose writing appears in a variety of publications and books including the Chicken Soup series. She is co-author of Getting Your Financial House in Order published by B&H Publishing Group and has earned over 30 writing awards for her work. She is currently enrolled as a grad student at the University of Iowa after completing a double major in journalism and English in May 2008.

"I enthusiastically recommend this book to anyone interested in getting their financial house in order."
~ Ron Blue, Money Matters

"Those who apply the principles in this book will discover God's true blessings and have a floorplan for getting their financial house in order."
~ Gary Smalley, Smalley Relationship Center

"I just finished reading Getting Your Financial House in Order. Wow! I must say without reservation, this is the best book on financial planning I've read."
~ kldwidrick (South Carolina)

Available at Amazon.com
or through PayPal:

Includes my essay,
"A Treasured Gift"

Available at Amazon.com
or through PayPal:

View my page on NaBloPoMo

Followers - be the first, get a FREE book!